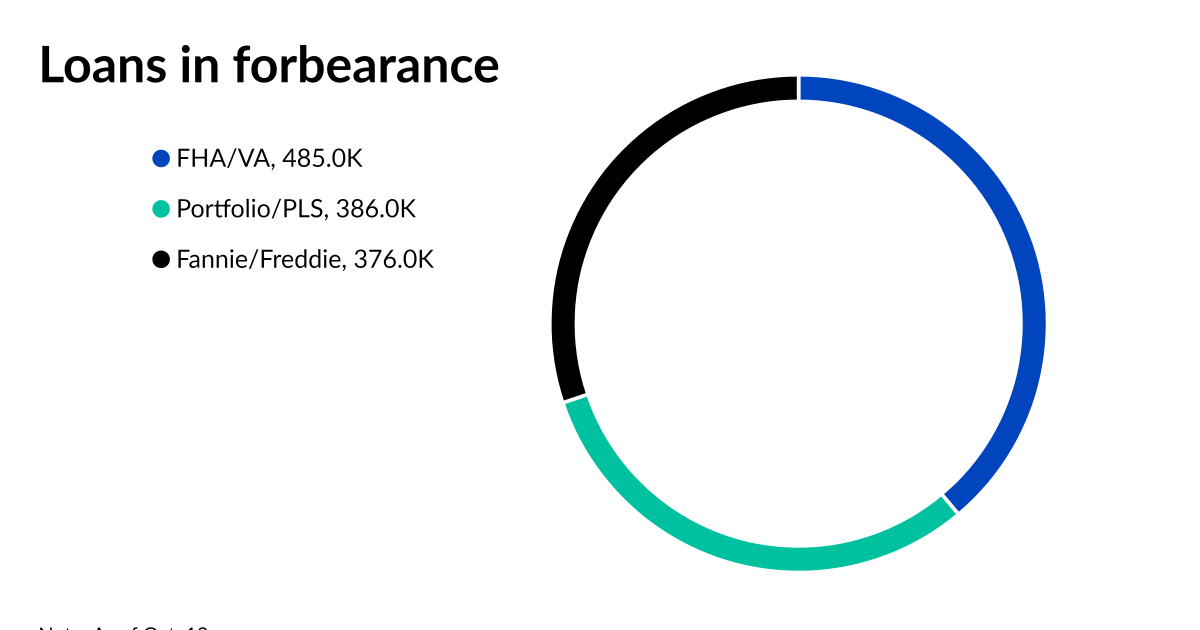 Over the past 30 days, the number of borrowers with pandemic-related payment suspensions has fallen at a rate not seen since the arrival of the coronavirus in the United States.

Loans in active forbearance fell 359,000 or 22% during that period, according to the latest report from Black Knight. The drop for the 30 days ending October 12 was in line with a large number of plan expiration dates and occurred despite extension of what was previously a September 30 deadline for initial forbearance filings on government loans.

Forbearance on mortgages insured by the Federal Housing Administration or guaranteed by the Department of Veterans Affairs fell 26% or fell 160,000 over the same period, compared with 21% or a drop of 101,500 for loans purchased by government-funded companies Fannie Mae and Freddie Mac, and 20% or a drop of 98,000 for portfolio loans or private label titles.

While the extension of the government’s loan maturity did not slow the 30-day rate of decline, a shorter-term decline in forbearance recorded in the Black Knight report was slightly less than previous. Abstention in the seven days leading up to October 12 fell 143,000 or 10%. Black Knight had registered a decline of 177,000 or 11% the previous week.

Declines occurred in all product types over the seven-day period. Fannie Mae and Freddie Mac and FHA and VA loans, both of which now have indefinite dates for initial forbearance plan deposits, saw corresponding declines of 6% in a straight week.

FHA and VA loans as of Oct. 12 accounted for nearly 39% of all remaining abstentions in the market, followed by PLS loans at 31% and Fannie Mae and Freddie Mac mortgages at over 30%.

About 1.25 million mortgages representing 2.4% of US home loans remained forborne as of October 12, compared to 2.6% as of October 5. The abstention rates for the three types of loans as of October 12 were as follows: FHA and VA, 4%; portfolio and private securitized loans, 3%; and mortgages purchased by GSEs, 1.3%.

Going forward, Black Knight expects 47,000 outings of September’s treatment to be completed and another 329,000 plans to be withdrawn or extended in October.

“The potential for further substantial declines will continue through early November,” said Andy Walden, vice president of market research at Black Knight, in a blog post.

Black Knight’s figures come from its McDash Flash dataset, which provides daily information on the loan and payment status of more than 60 of the largest service providers, reflecting around 70% of the market.